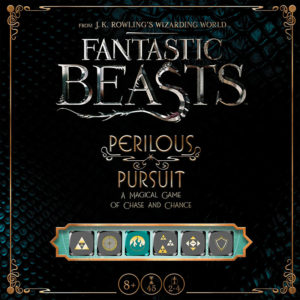 One of the games that is in our most played stack is Harry Potter: Hogwarts Battle (you can see our review HERE).
So, naturally, when we saw a new Co-op game from USAOpoly (now called The OP) set in the Harry Potter universe, we were already halfway to the checkout. 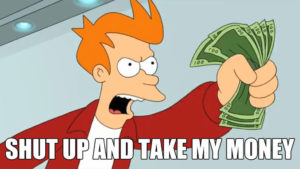 Fantastic Beasts:Perilous Pursuit is a Co-op game for 2 to 4 players based loosely on the Fantastic Beasts movie (which we quite liked).
It’s a dice-based game where each player takes on the role of one of the four heroes from the movie – Newt, Jacob, Tina, or Queenie – to try to capture beasts into Newt’s suitcase before they escape or kill the heroes.

Sound interesting?  Then read on to learn more.

Setup: Each player takes one of the character boards and the associated cardboard Ready tokens, Set tokens and Shield tokens.  They will also add a health tracker clip to the right side of their character board on the 10 spot.

Each character board has the same five powers laid out in columns: Protect, Capture 1, Distract, Insight, and Capture 3. The height of the the column indicates how difficult it is to prepare that skill, with shorter being easier. 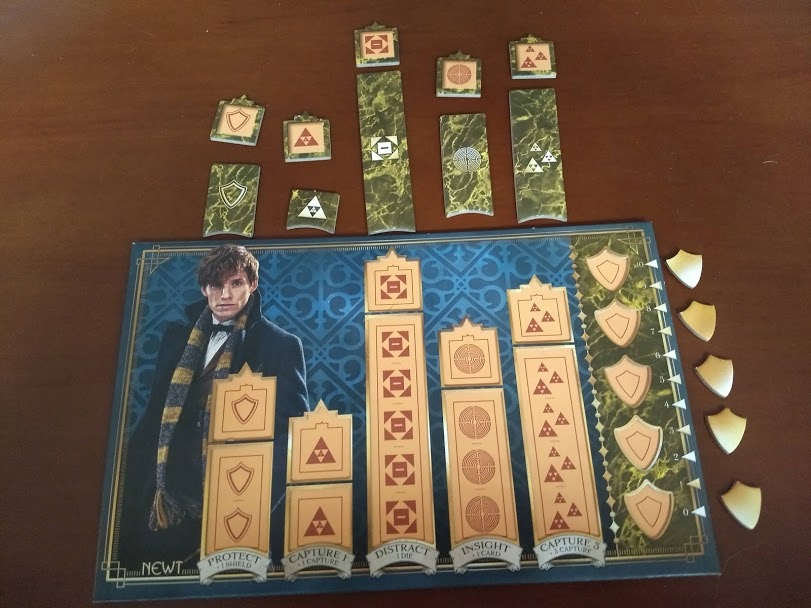 To setup the challenge, you will randomly choose one Level 1 beast, one Level 2 beast, and three Level 3 beasts and set them face down in a stack, with the Level 1 on top, and then turn the Level 1 beast face up.  Then you will put the progress marker on the Beast Progress track. 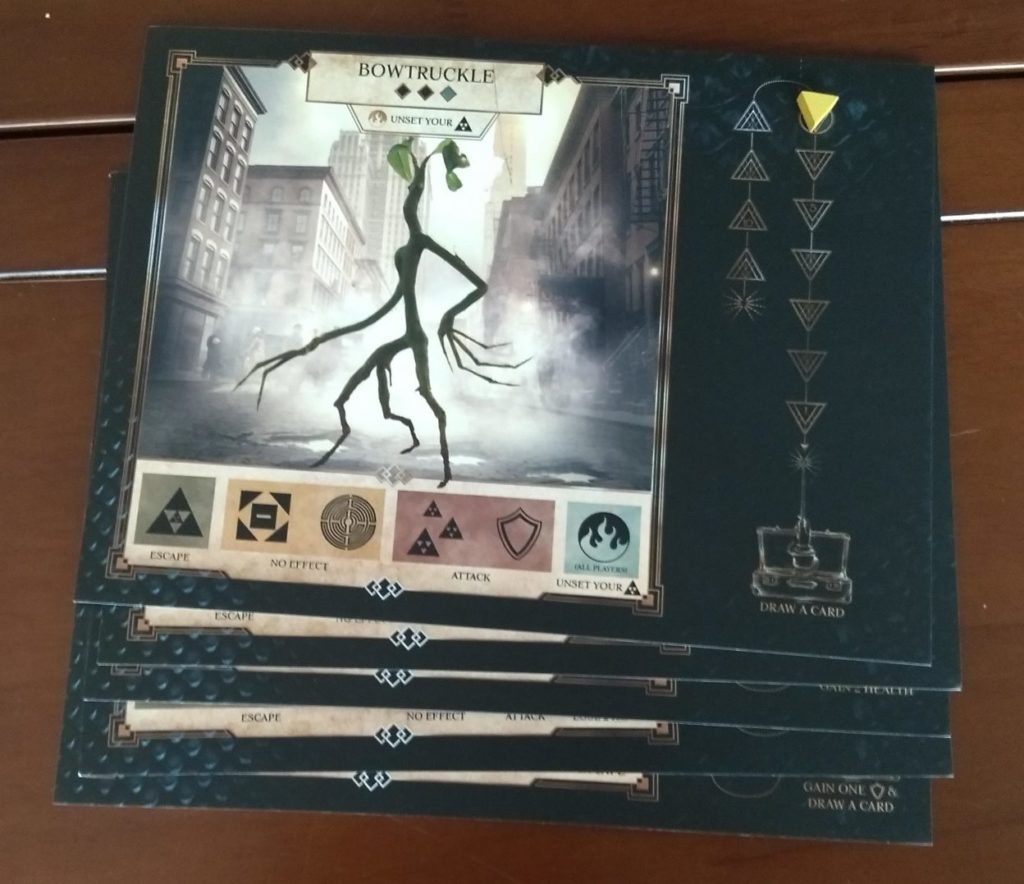 Once everyone’s got their character board, shuffle the Insight deck and deal each player one card.

On a player’s turn, they will roll all six dice.  The five black dice have one face for each of the powers and a Star that acts as a wild.  The green dice has a Beast Reaction face that immediately triggers a negative consequence in place of the Star.

Players will choose dice to keep and then reroll the remaining dice, as in Yahtzee, for a total of three rolls.

Players need to acquire a set of symbols to match the lower part of the column in order to cover it with a Ready token.  One more of the symbol will allow the player to place the single symbol Set token.  Once the Set token is in place, additional symbols of that kind will allow them to use that power.  Each power can only be used once per turn. 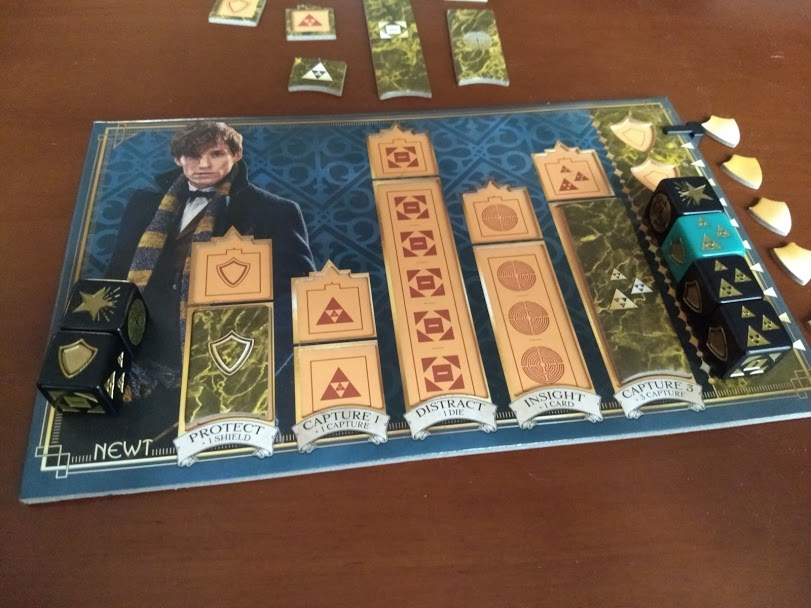 Example: Newt in the picture above rolled three Capture 3s, one Protect, and two Stars.  This allowed him to cover the Ready section of Protect and Capture 3.  On a subsequent turn, rolling two Capture 3s would allow him to cover the Set space and then use Capture 3.  This would move the Beast Progress tracker three spaces toward the suitcase.

The five powers do the following:

Insight cards contain symbols which can count as an additional icon or contain other benefits, such as ignoring a negative consequence.  Insight cards can be used on any player’s turn.

Once a power is Ready and Set, it stays Set for the duration of that Beast and can be triggered by a single die in subsequent turns.  One neat mechanic is that if multiple players have the same power Set, they can assign additional dice to the other players board on their turn.

So, for example if Newt and Queenie both have Capture 3 Set and on Newts turn he rolled two Capture 3s, he could use one on his board and assign one to Queenie’s board, thus moving the Beast Tracker 6 spaces.

Once all dice have been assigned for the turn it’s then the Beast Reaction phase.  The player must roll dice for the Beast based on the dice specified on the top of the Beast card.  For each symbol rolled, a negative consequence will happen.

So, for example, in the Bowtruckle above, the player must roll two black die and a green day.  For each Capture 1 icon rolled, the Beast Tracker would move away from the briefcase by one space.  For each Shield or Capture 3, the Bowtruckle would attack the player.

If a Beast attacks the player, each damage can be absorbed by Shield tokens.  Rather than affecting health, a Shield token would be removed from the character board.  If the player is out of Shields, each point of damage moves their health tracker down a level.  Note that there is almost no healing in the game, so health should be managed carefully.  If a player hits zero health, everyone loses.

Once a Beast is moved into the Suitcase, a reward is immediately handed out to all the players.  In the case of the Bowtruckle, each player gets to draw an Insight card.

Once rewards are figured out, the players prep for the new Beast.  All the Set tokens are removed (unless  the reward says not to).  Then each player will roll one black dice and remove the Ready token from the power that matches the icon rolled.  If a Star is rolled, the player instead gets to choose a power to re-Set!

The next beast is turned up and play continues.  Any Ready and Set tokens removed will need to be reapplied before the power can be used again.

The players win when all beasts are captured. They lose if two beasts escape or a player loses all their health.

Fantastic Beasts:Perilous Pursuit is a nice quick co-op game.  It works well for a mixture of player counts and can be handled by even younger kids.

It is not an excessively “deep” co-op game but has some good decisions and a strong press-your-luck element to it.  Do you go for trying to ready one of your more difficult powers or do you take the easier path?  Any dice you can’t use are discarded, so there are consequences for pressing your luck and failing.

The game never feels impossible to beat and the difficulty scales well, with four player being only a bit harder than two.  The co-op elements are particularly good with the use of Insight cards and being able to play “extra” dice on other players Set powers.  We found that the game definitely rewards you for shared planning and cooperation.

The art is from the movies and is clean and well laid out.  The theme of moving Beasts into the suitcase connects really well to the movie.

There is a nice feeling of progression as you build your Ready and Set powers and then keep a portion ready for the next beast – and that progression is needed when you turn up something like the Erumpent.

An average game of Fantastic Beasts:Perilous Pursuit takes about 30 to 45 minutes for us, though if things go south it can go longer.  (See Erumpent above)

There are a limited number of each level of Beast, particularly the lower levels, which means you will likely see the entire variety of beasts in just a few plays.  The dice rolling nature of the game means that each time you encounter them, things may go differently, but it does limit the replay a bit.

The game works very well as a filler or as a light game and it does play well with a range of players, from seasoned gamers to Harry Potter fans who are just embarking on board gaming.

Since we travel quite extensively and have a shelf full of games, we’ve been adding information into our reviews on how space efficient the game box is and how easy it is travel with or repack for travel.  A lot of games ship with a huge box for the components and could easily fit into a smaller box.

Fantastic Beasts:Perilous Pursuit comes with a large (and not very robust) plastic insert that holds the dice up to a window in the lid so that they are visible from the outside of the box.

While we understand why this was done from a aesthetic standpoint, in practice it was inconvenient.  Our insert broke the first time we removed it from the box.

With the insert removed, the remaining components have a lot of free space in the box.  The largest component is the (very nice) character boards.  We’ve successfully repacked this game into a smaller box for travel several times.

Once nice touch is that each characters Ready and Set tokens come in a separate bag which makes setup and packing up a snap… and also makes repacking a snap.

The box is a fairly normal size and is not a big consumer of shelf space, so if you aren’t traveling with it frequently, the extra space in the box will likely not be a problem.  Still, we’d like to have seen a bit more space efficiency.

A dice based co-op game built on the world of Fantastic Beasts.  Great co-op filler game!