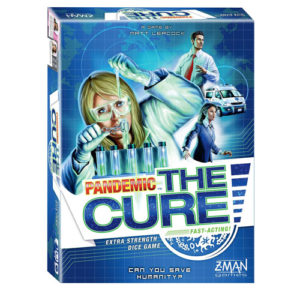 We (as in The Faithful Sidekicks) are big fans of Co-op games. If you are unfamiliar with Co-op games, they are games where all players are working together toward a single goal – either all players win together or all players lose together. Everyone combines their intellect and skills to defeat the game.

From our view, the game that really brought this genre of board games into the prime time is Pandemic. We love Pandemic so much, we wrote a song about it:

In Pandemic, each player takes on a role as a member of the CDC to try to keep the world from being overrun with disease. Players move about a map of the world trying to keep diseases in check and discover cures for each of the diseases before the various diseases outbreak too many times and overwhelm the world.

Pandemic: The Cure is the dice version of Pandemic.

In this version, the “map” is made up of six discs representing the inhabited continents of the world. The continents are ranged around a center ring that is used to track the progression of various states, such as the infection rate and the number of outbreaks. In the center of this ring is a open section referred to as the Treatment Center. There are “infection” dice in four colors that represent the four diseases you need to cure

Each player assumes a role that has unique powers and a unique set of dice. On their turn the players roll the dice and perform the actions on the dice or re-roll the dice. Actions range from moving dice into the Treatment Center or from there into the supply bag, sampling diseases toward finding a cure, or various other special abilities. Each players dice also has a Biohazard symbol which can not be re-rolled and which increases the infection track.

Once a player takes his actions, he pulls dice randomly from a bag based on the current infection rate, rolls them, and places them on the corresponding continent. If a continent ever receives more than three dice of one color, the disease “outbreaks” which moves the outbreak scale up, and the extra infection dice is placed on the next continent over. If the infection rate or outbreak scale ever max out, everyone loses. If the players ever run out of disease dice, everyone loses.

Pandemic: The Cure has solid components. The game could almost be called the travel edition of Pandemic. We found that the game could easily be broken down and stored in the bag that was included to hold the dice, yet it was shipped in a full size box. (Our preference is to use the least amount of box space needed – we have only so much shelf space, after all. However, this larger box approach is not an uncommon occurrence in board games). The pegs in the center circle tended to be a bit fiddly, not always fitting smoothly, and because they are fairly small, they may be a source of frustration to some.

The game itself has a significant “Press-Your-Luck” factor as you roll dice to find the optimum moves without encountering biohazards. Because of the random nature of the rolls, the game is a bit less strategic that the original Pandemic, but more reactive/tactical.

We found the game worked well with a smaller number of players – the odds of winning were slightly better and the randomness felt less pronounced. Playing with four players felt far more difficult that playing with two.

The game is quick to setup and quick to learn – in fact it is quicker to pick up than Pandemic the boardgame, in my opinion. The roles felt more strongly defined in Pandemic: The Cure – you’re actions are truly unique.

One major thing that is a plus of this game: The Alpha Player problem is nearly negated. One of the problems that happen in Co-op games is a more experienced player can sometimes start dictating to other players – “You should do this. I’ll do this.” (Also known as the Quarterback problem) Sometimes this advice is welcome, other times it isn’t. Players who are directed by an Alpha Player often end up feeling like they aren’t really playing the game so much as occupying a seat. Pandemic: The Cure makes this sort of player led direction more difficult – the players don’t know what options are open to them until they roll their dice and it’s up to the player to decided what to re-roll.

Pandemic: The Cure is a great game. It fills a slightly different niche than the original Pandemic but is still an exceptional co-op game. Almost every time we’ve taught this game, the initial game resulted in a loss, but the reaction from all the players was “Let’s play again right now! We are going to beat it!”. And because the setup and play time is fairly quick, with a game averaging around 30 minutes, you can keep playing it till you beat it. The ability to break it down and use it as a travel game is worth the price by itself.